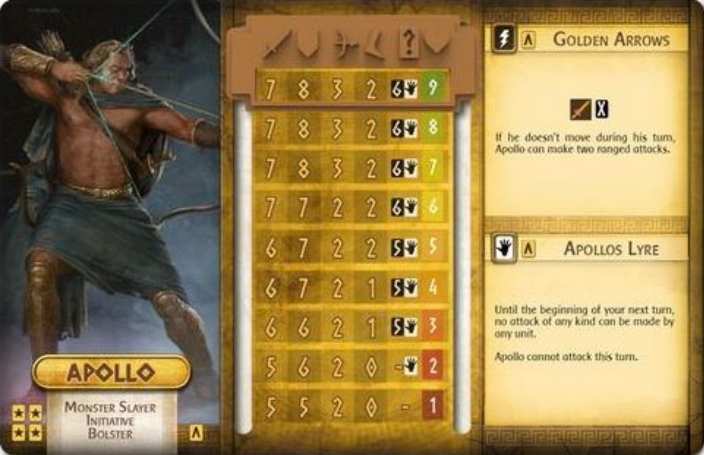 Although he isn't as agile and has 1 less activation, Apollo is a bit sturdier and stronger than his sister Artemis. But this comes at the expense of AoW cards: both his abilities need one. So bring some extra - I don't think we will see an army list with Apollo and no additional heroes. He also has no free Troops activation - but buffs them.
Especially against monsters Apollo stands his ground. His special power gives him two 6 dice attacks, of which he can re-roll 2 dice per attack when facing enemy monsters.

His second ability is a very special one. At the cost of 1 AoW card all hostilities stop until his next turn. Great to get that Omphalos or let your units regenerate. Combine with other units with annoying powers to let your opponent discard, get tokens, pay AoW cards, as long as that ability doesn't count as an attack.

Apollo + Autolycus would make it very hard to stop them from gathering four omphalos.

Apollo would stop hostilities, and Autolycus could steal any omphalos he wants and move safely to Apollo to let him claim them. Just need some art of war cards and activations for both.