So... I really want to introduce her into MBP. I liked her so much when i was a child. The thing is i dont remember so much from the show besides some greek stuff this show left into my head, so maybe you guys have some ideas?
I'll rewatch the show to get ideas but so far i have this idea about the chakram:

Xena can performe a range +1 attack over one miniature. If the attack succedes the player can roll a dice, if the result is equal to X+1 (starting as 0) she can perform another attack agaisnt another miniature.
You increment the X count and the repeat until you fail.
1- You cannot attack same miniature twice until every other miniature in the zone has been hit. And it keeps going same way.
2- You cannot hit two consecutive times the same miniature.
3- Chakram can hit a rock in an adyacent area to hit a miniature two consecutive times. Only one miniature in the area to applie this. The second time X adds 2 to hit count. It keeps going same way (x+2 each time until you fail a roll).

What do you guys think? Maybe two dice roll? Is anywhere a probability chart with the MB dice mechanic?

Edit: Also, maybe you should only choose which miniature hit first and let the dice choose the successive targets

Arkey.. that is amazing!! I wanted to ask you in the comments to post it here but you already dit.. Awesome!

I was a huge Xena fan when I was young.... Amazing!

I couldnt let it go. And i need you guys to test and balance her in the future =D

We will test as much as we can.. I promise.. I hope this game will be very popular in my group.

I just need an extra set of Art of War cards.. We have enough chars and mini's for 2x 4 player games at the same time :p

I'll use proxies in case we cant get more

I will just buy sleeves with a closed back (pink or smthin). Since I was going to sleeve everything anyway this is a tiny hassle.

And then I will use a magic card as the "hard base" and photocopy a few decks of the stuff :p

maybe we should give her a new name.. X sounds so impersonal

I like her as it is, we all know who we are talking about (atcually in game sesions ill just call her Xena). Actually im thinking about changing her to Y, warrior princess with a small stick on the Y in other color).
I named her just X cause i asked for her somewhere (livestream and i think i asked for her on comments too) and i knew there could be copyright problems if MBP provides her.

Anyway you can rename her in the dashboard ill make as soon as i play the game and find one that seems balanced before start testing her.

Changing her to Y... but WhY

! :p
Ill call her Lady X...
And Maybe.. I will also make Young Hercules xD! Then we will have three of those :p

@Arkey: I would make the chakram work more simple, as otherwise you will be rolling a lot of dice for quite some time. Let me give a try...

Chakram (1 AoW-Card): Gain Range +1 for your attack. The attack is an Area-Attack. As long as you keep damaging foes with you attacks, you may pay one AoW-Card after one such attack to let the chakram ricochet into an adjanced area and continue the Area-Attack there. You may not return to a previously attacked area in this way, and any attack that fails to do damage immediately ends the flight of the chakram, which then returns to X.

Something like this. - Not perfectly worded, unique, but it keeps the ability similar to already existing rules (area attack) - that makes it more easily understandable. What do you think? 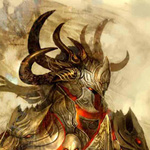 You are totally right about rolling the dices, but keep in mind the difficult increases on each roll, so sooner or later (for 1 dice it shouldnt be more 5 attacks, even if you can rerroll after you hit your 6 consecutive attack).

But, man i like the idea, i like it so much (As you said, it looks more like provided rules, and sounds simpler than my explanation). It feels a bit op on paper, but seems cool (and expensive in AoW terms).

Im not sure about how area attacks works, do you roll a single dice and that works as an attack on each unit? Or do you roll one dice for each attack, and then each unit got as many wounds as possible?

I didn't want to add AoW cards cost, but we will see when we can test her.
I guess ill try both and something between them. Cant wait for the pledge to arrive.

Area Attacks are actually a series of single attacks, one against each (enemy) unit in the area.

I would abandon the idea of decreasing the chance for an additional attack, it seems clumsy to me...
If you do not want to spend AoW Cards, however, I have another idea up my sleeve:

Chakram: Gain Range +1 for your attack. If you discard one AoW-Card, the attack is an Area-Attack. As long as you keep damaging foes with you attacks, you may let the chakram ricochet into an adjanced area and make another Attack (or Area-Attack for another AoW-Card) there. For each additional area your attack suffers -1 Attack. You may not return to a previously attacked area in this way, and any attack that fails to do damage (or Area-Attack that fails to damage each foe in the area) ends the flight of the chakram, which then returns to X.

This way, you can either attack one foe after another (in different areas) without discarding any cards or attack the whole bunch by discarding AoW-Cards.  BTW. what X does there in the show is definitely an "Art of War", so I think if would not be inappropiate to have an AoW-Card-cost.

I'm still not sure how Area attack's works. The rules says "A separate Attack roll for each targeted Unit", but lets put an example on it:
You have 2 Attack on Dashboard, and you're doing an area attack against 3 units,


About the AoW, yep i understand what you mean but i like to think she is just natural on it.

I like how your second idea looks, but i guess i would set the attack as Area, no need for AoW on the first area, but you still can discard one AoW to jump into an adjacent area.

This doesnt go as i imagined her as a hero to put a good amount of dmg in one single area (either through multiple minions on it or from an adyacent Impassable/Difficult terrain). But looks cool and simply enough